WDoR events across the USA

From Boise to Boston, Durham to Denver, Omaha to Orlando, communities across North America mobilized for Safe Streets to Save Lives, as part of annual World Day of Remembrance for Road Traffic Victims on Sunday, November 20, 2022.

A record number of communities across the U.S. — more than 60 — and hundreds more worldwide led actions calling attention and urgency to the roadway safety crisis. Last year, 42,915 people were killed in roadway crashes in the U.S. – the highest number since 2005.

Notably, advocates’ calls for change were reinforced by the nation’s Secretary of Transportation Pete Buttigieg, who acknowledged that “mourning is not enough,” as he recognized World Day of Remembrance: 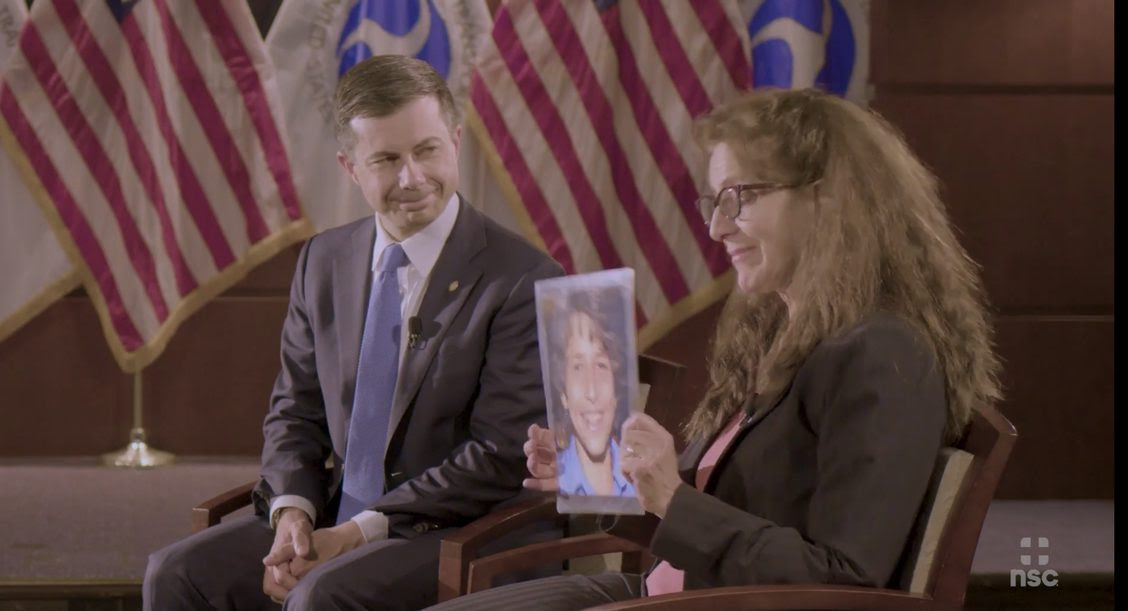 “We could be doing more, as a country and as a society, to make sure that nobody – no family, no dinner table, no workplace or sports team – has to have an empty place because of a preventable crash”.

World Day of Remembrance organizers highlighted that the record number of fatal crashes are not isolated, inevitable incidents, but are both predictable and preventable. They pointed to well-proven solutions that can and should be put in place, including:

Activities ranged from memorial walks and bike rides, candle lighting vigils, shoe memorials, sign installations, and (a first!) a ribbon cutting ceremony on the first-of-its-kind Memorial Grove for Victims of Traffic Violence. Following are a sampling of World Day of Remembrance events across the nation:

In Washington, D.C., hundreds of people had a Ride for Your Life event – a bike ride in memory of Sarah Langenkamp, a U.S. Diplomat who was struck and killed while bicycling this year.

In Madison, WI, the press conference was opened by the Mayor, who lost her grandfather and a brother in traffic crashes. A moving memorial with figures symbolizing those that Madison lost in traffic crashes over the past five years had been set up during the weekend.

In Albany, NY, the event was organized by Albany Bicycle Coalition, Walkable Albany and Parks & Trails New York, who are advocating for policy changes to reduce the number of deaths and injuries in the city.

In Los Angeles, CA, advocates, elected officials and transportation safety professionals joined together to install a rainbow halo in memory of Josh Markowitz, who was hit and killed in Los Angeles in 2021. (Hear from Josh’s mother, Lori, in a piece linked below.)

In Philadelphia, PA, people gathered to remember 102 people that have been killed in traffic crashes this year and called for the expansion of safety strategies citywide.

In New York City, members of the NYC chapter of Families for Safe Streets organized a ribbon cutting ceremony on the nation’s first memorial tree grove being planted for traffic victims. They called on the New York State Legislature to approve a package of bills focused on safe speeds, safe vehicles, safe roads, and support for those personally impacted. They were joined by many elected official, including the Mayor and City Council members members (see more below).

This website uses cookies to improve your experience while you navigate through the website. Out of these cookies, the cookies that are categorized as necessary are stored on your browser as they are essential for the working of basic functionalities of the website. We also use third-party cookies that help us analyze and understand how you use this website. These cookies will be stored in your browser only with your consent. You also have the option to opt-out of these cookies. But opting out of some of these cookies may have an effect on your browsing experience.
Necessary Always Enabled
Necessary cookies are absolutely essential for the website to function properly. This category only includes cookies that ensures basic functionalities and security features of the website. These cookies do not store any personal information.
Non-necessary
Any cookies that may not be particularly necessary for the website to function and is used specifically to collect user personal data via analytics, ads, other embedded contents are termed as non-necessary cookies. It is mandatory to procure user consent prior to running these cookies on your website.
SAVE & ACCEPT